Astro Mosaic is a tool for planning telescope observations. It shows a visual view of the target using a selected telescope, visibility during the night and it can calculate mosaic coordinates. 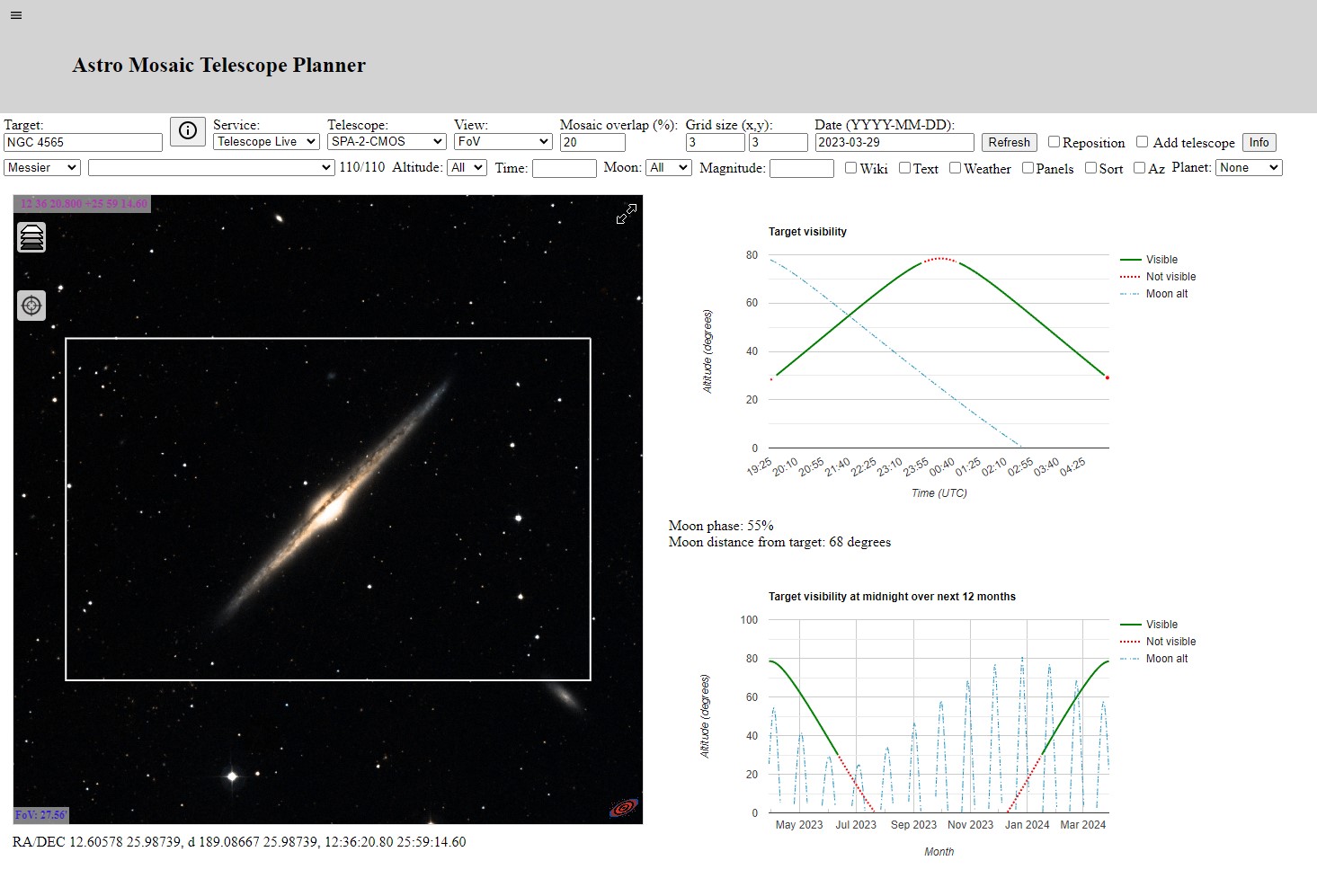 Direct links to telescope services are below. 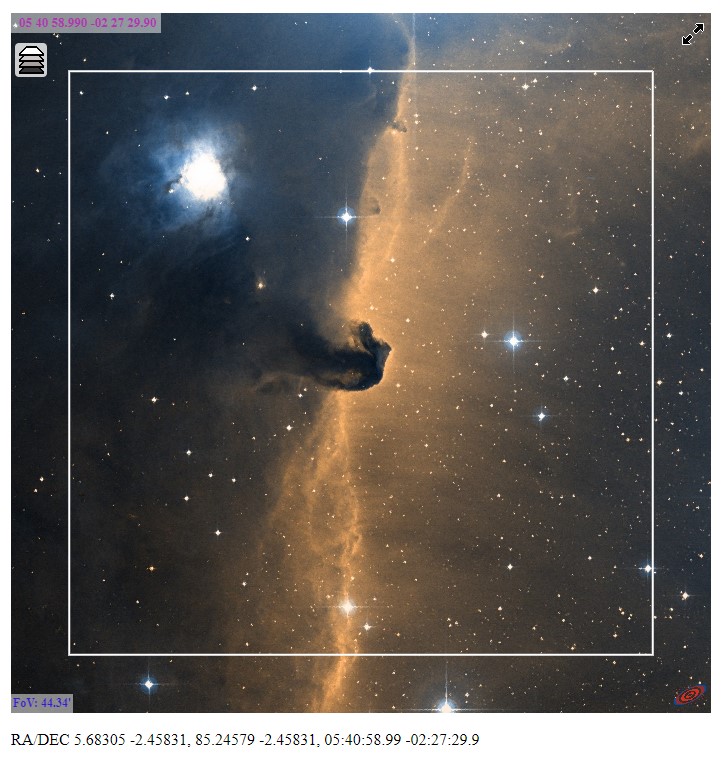 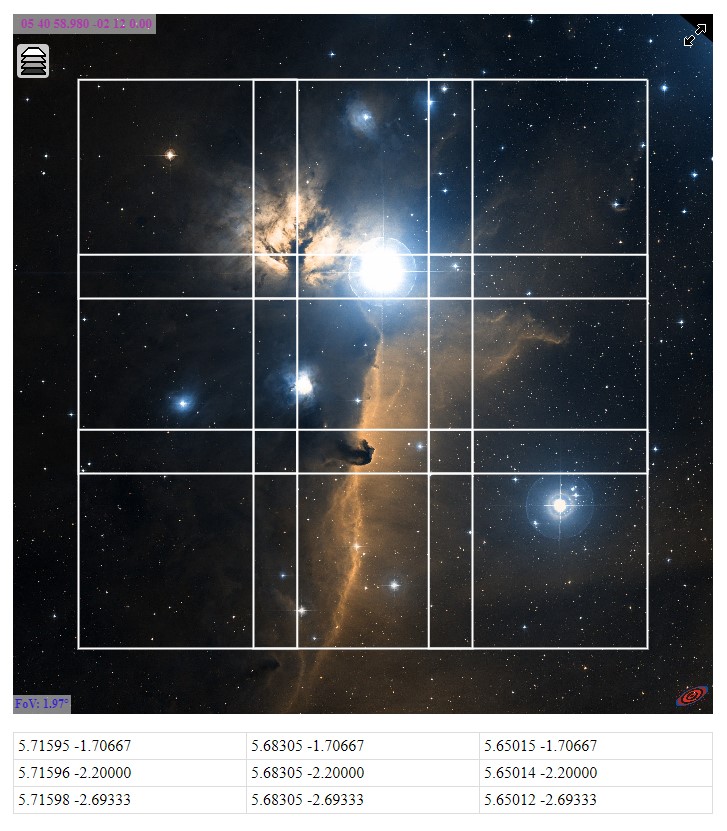 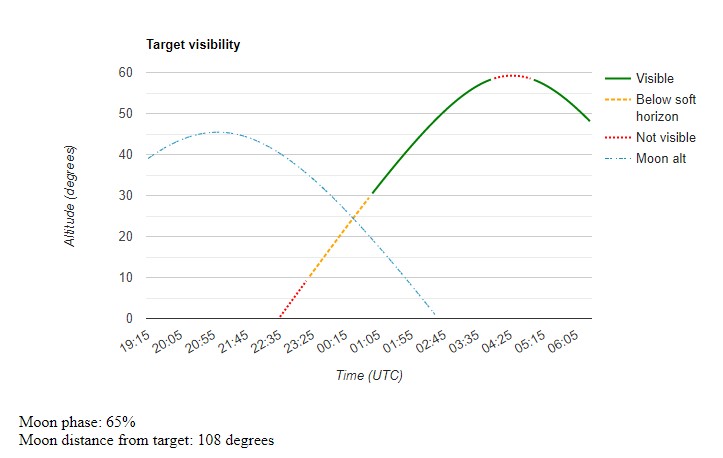 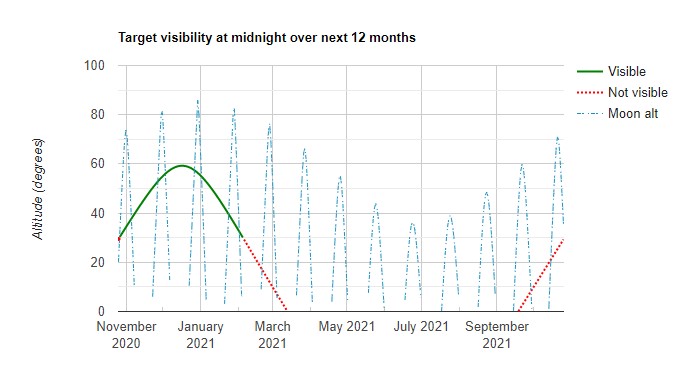 Target altitude and moon altitude at midnight for the next 12 months. 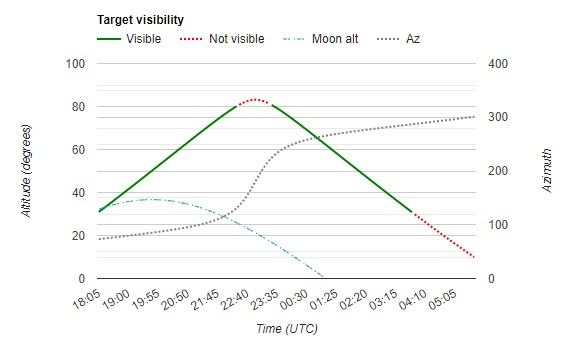 All catalog object names are added as a catalog layer to the map view. Each catalog object name is written next to that object on a map to make it easier to identify major objects in a map. Catalog map layers are disabled by default.

Catalog object markers are clickable. When you click on a marker a short info is written on the panel to the right side of the map. If the Wiki check box is checked then the Wikipedia page of that object is shown when possible.

It is possible to filter catalog lists in a few ways.

Filtering points are calculated at midnight and then two and four hours before and after midnight. So in some cases it is possible that a target is not listed if it will match the filter only between those calculated points.

It is possible to sort catalog lists by altitude when altitude filter is enabled. It should help finding those targets that have the best visibility ate selected time. 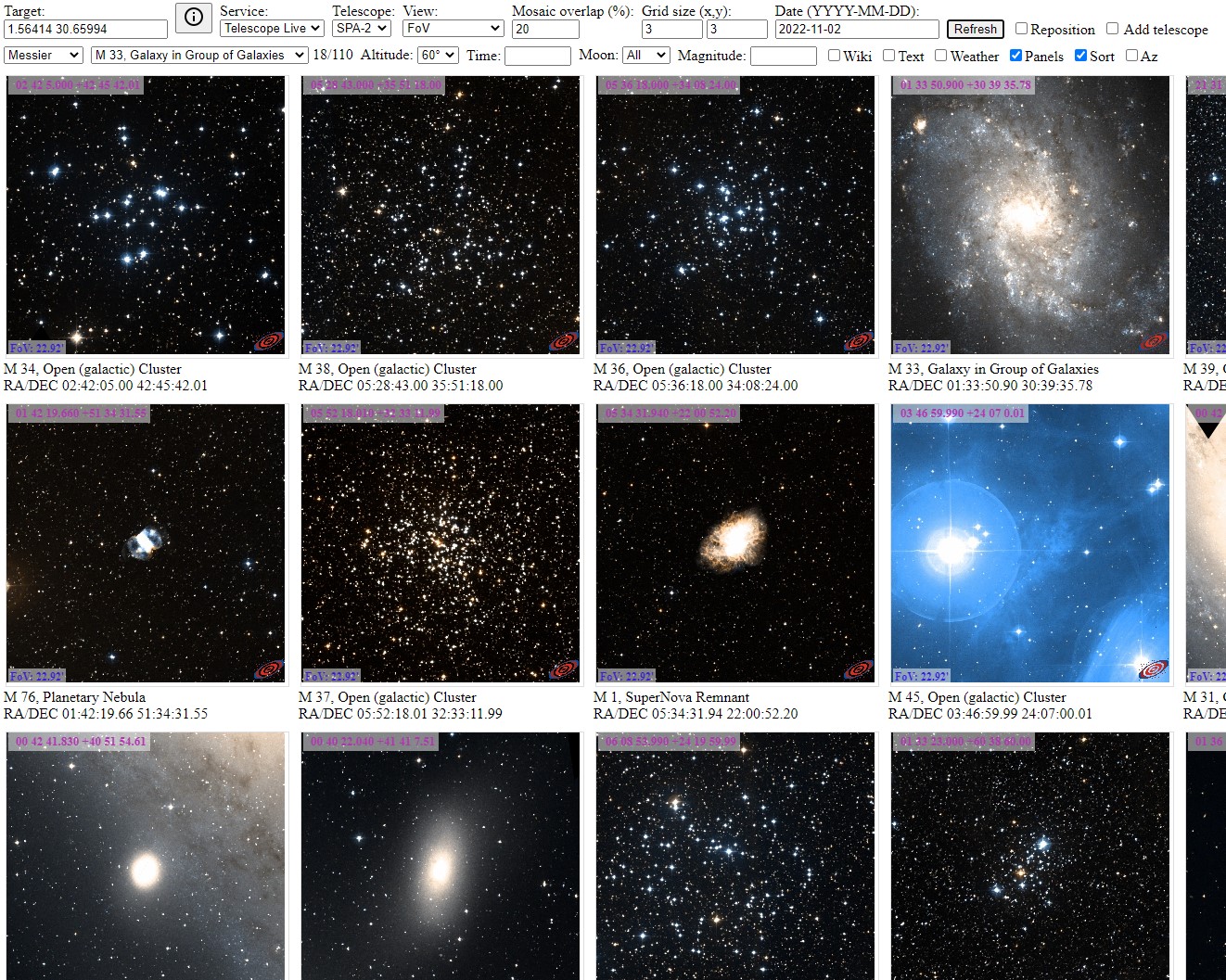 Controls on the map

Visual reposition of the target

Reposition is useful also when searching for targets in the sky map. It is possible to center to the current Aladin view position by checking the Reposition box and moving the image with the mouse. Note that if you have moved far away from the original position you need to click the Refresh button to update visibility charts.

It is possible to add one or more marker to the view by preceding coordinates with a special keyword marker. Markers work only with ra/dec coordinate list and cannot be the first entry in the list.

Configuring Astro Mosaic using URL parameters is described in a document Astro Mosaic Configuration. It is possible for example to add your own camera and lens or telescope to Astro Mosaic.

Astro Mosaic would not be possible without Aladin Sky Atlas and Aladin Lite. Aladin Sky Atlas is a great interactive map created from digitized astronomical images. It is simply amazing that such a great resource is available. And it is totally free!

Aladin Lite provides HTML5 and programmable Javascript API interface to Aladin Sky Atlas. It makes it very easy to integrate into a web page. There are great examples and documentation to get started very quickly. For displaying images Aladin Lite uses preprocessed data from HiPS. HiPS (Hierarchical Progressive Surveys) is the hierarchical tiling mechanism which allows users to access, visualize and browse seamlessly image, catalogue and cube data. There is 250TB of data available from different HiPS surveys.

Astro Mosaic uses Sesame service for resolving names. When a name like m101 is written into the target input box, a query is sent to the Sesame server to resolve the name. As a result Sesame server will return an XML page that contains target RA/DEC coordinates among other things. Sesame is actually an interface to other name resolvers: Simbad, NED and VizierR.

There are very good resources available to calculate sun, moon and planet positions at a certain time and place. In Astro Mosaic that information is used to calculate for example moon position and altitude during the night, sun rise and set times and moon phase.

Moon phase shown in Astro Mosaic is based on it's own calculations so it may not be exactly correct. It was very difficult to find a good example of that so Astro Mosaic just calculates the angle between sun and moon as seen from earth. That angle is then used to calculate moon phase.

When the moon and sun are on the same side angle is zero degrees and moon phase is 0%, when they are on opposite sides the moon phase is 100% and when angle is 90 degrees phase is 50%. And other vales are between those.

Astro Mosaic can optionally show a Wiki page of the target. Wikipedia has an API that can be used to find a page id based on a search text. A surprisingly large number of Messier, NGC and IC targets has its own page at Wikipedia. If a page id is found then a mobile version of that page is shown in its own frame.

Astro Mosaic does some basic parsing on names before they are sent to Wikipedia search. For example messier objects can be written as m101 but they are translated to Messier 101. Also NGC and IC objects are formatted slightly before sending to Wikipedia.

Sometimes in 2018, very early in my astrophotography hobby, I wanted to image Western Veil Nebula. It did not fit into the telescope field of view so I started working on a three panel mosaic. I used Stellarium to approximately find correct coordinates. I managed to get the mosaic done but it was a very random process. I started to look for some tools to calculate mosaic coordinates but failed to find any free ones. So I decided to learn something new and do the coordinate calculations myself. I did the first version in Python but soon found out about Aladin Sky Atlas. With that I could do even better and see the actual framing on the sky atlas on a web page. After that I have added more functionality like visibility charts and different catalogs for finding targets.